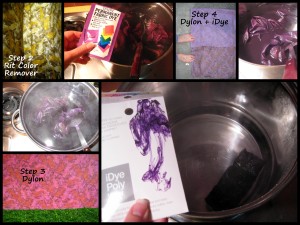 I’ve been tweeting about dying fabric, specifically purple fish (fishies!).  I started out with this navy blue fabric (still hunting for the original pics) with orange fish on it.  Meh!  Not really my thing, but it was going to be a pair of pillow cases.  But, it got tucked in the stash and each time I pulled it out, I just couldn’t get inspired.

So, as part of my “use the stash” efforts (currently ongoing with the FiveS effort), I decided, “What the hell!  Life’s short, I’ve got some cool cotton fabric on hand with gold paint.”  So I picked up some Rit color remover and attempted to remove all color except the gold fishy outlines (they’re actually koi, but I think it’s funny to refer to them as fishies).  Um, no.  That didn’t happen as expected.

If you look at “Step 2” noted in the picture, you’ll see it’s kind of brown.  Oh boy, that did NOT thrill me.  It wasn’t even a nice earthy brown.  This is the orangy brown you get when you CANNOT pull all the color out of the fabric.  Overdying on this color produces muted and muddy tones.  Not the brilliant Tye-Dye like ones.

But, I pushed on.  I pulled out my Intense Violet Dylon pack and went to town.  The results, are in “Step 3”.  This was a natural fiber dye on a seemingly all cotton fabric.  But, what I realized is that this fabric wasn’t taking the dye fully.  It came out kinda pinky (which I expected), but much lighter.  So, I dug in my box of dye packets and found Violet iDye Poly.  Because, let me tell you, I was not done with purple.  Funny, because more than 2 years ago I was overdying a skirt and all I wanted then was purple too!

So after the Rit color remover and the Intense Violet Dylon and the Violet iDye Poly I’m left with is “Step 4”, dusty dirty purple fish which remind me of cool nights in the desert or of gypsy travelers.

More to come later when I actually turn this into something wearable!  I’m still pondering which side to use and it’s final purpose.  Who knows, it just may be a turban for MedFest! 😉

Color, color, and more color. I just need me some color!  I’ve 2 designs brewing in the pot.  The first is to design and create curtains for my living space which reflect more of my current personal style and bring more life / color into my home.  My original post on creating these curtains is found on my old blog.

The second is to design a sturdy, Mediterranean feeling, belly-dancy, chic changing room for the Pirate Queens of Wildhair Studio to use for MedFest09.  For those who don’t know, MedFest is short for Mediterranean Fantasy Festival.  It’s 2 days of nothing but belly dancing! Woo hoo!

So, I’m currently in my “research” phase.  This is a time consuming, enjoyable, idea processing phase.  I go to magazines, Google, Bing, Flickr, and search for images in the likeness of what I want to create.  Now, I must tread carefully, I’ve no intention of stealing or making an exact replica of anyone’s work.  Just like fashion designers or artists do today, this is how I start creating my design inspiration board.  I’ve done several searches and discovered I really like the following images:

As you can tell, there are many different ways to capture morocco, tents, bedouin, circus, tribal, crisp, clean, yet ancient designs.  This is what I do to begin to feel out my design.  What do I want to feel when I walk in the room?  What do I want others to feel.  This again gets back into WIIFM (what’s in it for me).  The changing tent will have a HUGE audience.  What impression do passers by get when they see it? (you only get 8 seconds!)  Does it say:

Since it will be at the back of our booth, I want it to entice people to drop in.  Try on some of our tribal adornments.  Meet & chat with me, one of the MedFest Performers.

As for my curtains. I’m choosing to only delight myself.  And, if I discover something fun in the process of designing/making, all the better!  Okay, I admit, I do want to delight my visitors.  I want them to think, “Wow, I’ve never seen anything like that in anyone elses home!”  Fascination. Wonder. Those are the words to describe my curtains.

For my first introduction back into the “offical performance arena” I danced at the Nari Women’s Hafla Northwest. It was wonderful! All the performances were amazing. Nalini dazzled us with her cool and expressive Bollywood dancing. The Nari women danced several traditional dances from a variety of countries. A few girls from my class gave some fabulous performances. Plus, I got to meet Indigo. You know I have looked her up a bit and never met her until last night.

Well, the time after intermission came for my performance. I was just going to get out there and improvise to Buda. I planned to sing this bit “My Own Home” from the Jungle Book. I thought, “Oh yeah, balance this bowl on my head while acting like the water girl, dance around a bit, do my party trick, Buda kicks in, more dancing and wowing the crowd, then I’d walk out singing the latter part of “My Own Home.” But NO!

I had to go and grab the wrong frickin CD. I pulled some audio book I was listening to in the car instead of my Dance CD. OH MY Goodness!

So, I’m whistling and walking in with the bowl. I make my way to center stage and pose. No music. I’m waiting… waiting… waiting… I hear someone whisper, “Is she supposed to do something?” So, I smile at the audience quite coyly. Hee hee hee hee… I pose as for a photo. Oh, here’s another photo op – next pose. And another… Then, the CD comes on and it’s frickin Rhonda Byrnes telling everyone about The Secret!

Oh the terror you could see in my eyes. But, I played it off. I made some graceful gestures for “CUT!!! You silly man in the back pushing the play button! Can’t you see this is entirely WRONG? There’s no music going on! Good Gods help me now!” I said Gods because in crazy situations such as this, one must ask for as much help as one can possibly get. So, DJ in the darkness finally sees my desparate attempts to cut the music. I mean really! What was I going to do? Dance to someone speaking? I don’t think so!

So, I tell the audience, “Why don’t I just sing and dance for you now.” To which I received much cheering. I think I started to become like one of those reality TV shows that is so utterly painful that it hurts to watch, but you CANNOT tear your eyes away. I couldn’t even hear the audience breathe. But I did.

I took my bowl off my head, pretended that I was in the forest singing to my bowl because it was the only one that would listen. I imagined myself by the side of the water, singing of always having “to fetch the water”. I sang the story to the audience of how one day I would grow up and “have a handsome husband and a daughter of my own.” I finished the main body of the song, placed the bowl on my head, turned to carry my water back home, and with the bowl balanced atop my head, I curtsied so deeply my right knee touched the ground.

It wasn’t my best day of singing. I kept forgetting to breathe and the key of the song; and with my adreneline pumping, I was afraid my voice would crack. I just hate to have an audience hear that. It makes me cringe. But – luckliy I avoided the crack-ege (get your mind out of the gutter!). I mean, I haven’t tried to belly dance and sing simultaneously. That is amazingly hard!

It wasn’t my best day of dancing. I had planned to so much more. I had ami’s and turns and belly tricks tucked in my belt. But, alas – it was a wonderful performance.

Many dancers came up to me after and said that they could never do what I just did. They were shocked and amazed that I kept going. One woman told me she would have run off stage. After the show, many people thanked me and told me how amazingly brave I was. People even told me I had a wonderful voice.

I was in shock. Had I really done that? I had and I pulled it off! So – when’s the next performance?

If you’d like to see a mini-video of it… check here:

Nate and I are dancing East Coast Swing. This is my least comfortable dance. I still had a blast. Best yet, mom came in just before this and didn’t even recognize me!